Inspired by his appreciation for Native Indian Art, Darrell set out to create a bike that would signify the North American Native Indian.

The motorcycle was built on a 2001 Indian Motorcycle Scout Chassis. Various parts were used from different Indian Motorcycle models including the Scout, Chief and Spirit manufactured between 2001 and 2004, with many one of a kind parts designed and fabricated locally in Calgary.

After spending a year researching Native Indian designs and motifs, Darrell settled on using the Prairie Tribe motifs blended with accents of western designs. His dedication to the project required another six months searching for Native Indian artists who would be willing to work on the bike.

With artists and suppliers secured across the United States and Canada, Darrell’s vision commenced. All parts were shipped to the artists for completion prior to installation on the motorcycle. Collectively each artist applied their signature talent to the bike that is appropriately titled, ‘Little Chief’.

The hand tooled and painted leather work was done by an artist near Chicago. The extensive engraving was done in Las Vegas. The Conchos’s, carved antique
turquoise, set on top of Sterling Silver with antelope bone beading was created by an artist in Arizona. A Nebraska artist provided the Sterling Silver inlays. Diamond
cutting was done in Nevada and the chrome work was entrusted to a number of
shops stretching from Alberta to Tennessee. Paint work and the windscreen engraving were completed by a local artist in Okotoks, and the performance engine work was done by a Calgary motorcycle shop.

The motorcycle is street legal and was often ridden to shows and corporate functions prior to being displayed at this gallery. 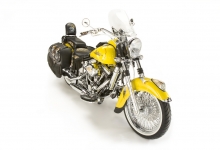 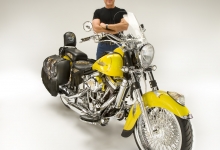 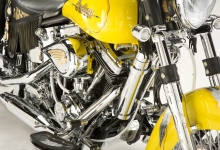 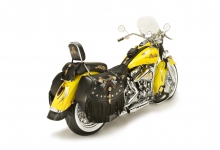 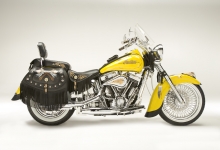 There is an enormous amount of fine detail on the bike, thus the closer you get to it the better it looks. In case you missed anything you can view photos of all the fine details here.